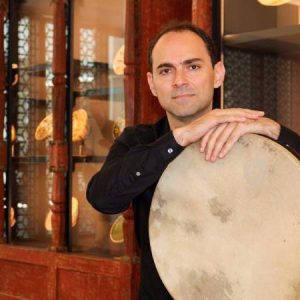 As an experienced musician, Ali has played several percussion instruments and worked with music scholars. He has also had the opportunity to work with many well-known musicians as well as musical ensembles and orchestras, Tehran Symphony Orchestra conducted by Majid Entezami, Manouchehr Sahbai, Shahrdad Rohani, Nader Mortezapour , Iran National Music Orchestra conducted by Farhad Fakhreddini, among others. He has had many concerts in Iran, France, Belgium, Italy, Netherlands,Switzerland and Canada. He has cooperated with Symphony and National Orchestras, Traditional and Kurdish Ensembles of National TV and contributed to  several soundtracks.He has also worked with traditional ensembles like, Naghmeye Kimia, Eal, Hamnavazane Mehr, Parnian, Taranome Jan, Mahtab Rou, Andalib, Shiraz, Barg, Najva and Partow ensembles among others. He has  authored five instructional books for tonbak, daf and udu.  He is the leader of Navaye Kimia Ensemble which has held several concerts in Toronto. He played at Tirgan Nowruz Festival 2017 in Toronto and led a workshop as well as being a part of Tirgan Festival 2017 in Toronto, performing in two programs with Ramiz Guliyev and Maziar Heidari.