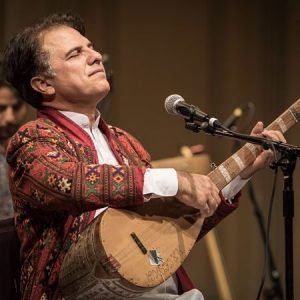 Rostam Mirlashari was educated at the Royal College of Music in Stockholm and is the vocalist in the multi-cultural group Golbang. He is perhaps best known as “Prince of Balochi music”. He has taken the rich musical tradition of his hometown of Balochistanin, in southeast Iran, and developed it in harmony with other musical traditions in his various bands. His signature is his unique voice and inner expressions.
Martin Nyström, music critic of Sweden’s most famous newspaper DN writes “On Golbang’s […] album ‘Setareh’, the seasons change the same seamlessly and you do not know which one is most beautiful. The singer, Rostam Mirlashari must have one of Sweden’s most beautiful and seductive voices. “. Martin Nyström, music critic of Sweden’s most famous newspaper DN
Sofia Lilly Jönsson talks about music in the prestigious magazine SvD and writes as follows:
“Golbang’s world pop music found a home in the Swedish folk world (…). Interestingly, given the week’s column, the record has a clear purpose to put together music for comfort and joy. But contrary to some quiet music for those mourning, it’s impossible to sit still when listening to “Gallawêja”, and how beautiful Rostam Mirlashari is singing in “Sabzast”.
The music magazine Lira describes Rostam Mirlashari and his Golbang live concert: “Rostam Mirlashari still has one of the most beautiful voices I’ve heard, and it’s just as good in such moody low-key visors as in the more odd pieces.”
Lotta Johansson, producer of Musikens hus i Rättvik, states that: “Rostam must have one of Sweden’s best voices! It is clear, sensible, touching and telling about experiences that go beyond the words. “Inspired by this knowledge, Rostam decided to create his first folk music band, the eight-piece ensemble Golbang (1994), which still tours across the globe with its unique mix of music from different parts of the world.
In addition to Golbang, Rostam has also been the initiator, composer and song arranger for: Shohaz (2001-2003), Padik (2002) and Sheida (2006-2007). All of Rostam’s bands share a mixture of music from different cultures, often including Persian, Balochi, Afghan, Kurdish, Swedish and sometimes even Norwegian musical influences. Rostam’s unique sound has achieved major success throughout the world and has led to appearances everywhere from the Voice of America and the BBC to Pakistani TV shows, and from Coke Studio to Swedish TV and radio programmes.
Rostam Mirlashari has been collaborating with the most famous artist from southern Iran, the unique musician, dancer and choreographer Saeid Shanbehzadeh and ensemble,e since autumn 2016, in a widely successful and creative project entitled” Afro-Iranian”. They brought the house down at the Apollo Theatre in New York and in San Francisco in autumn of 2016! Their well-reviewed album, Pour Afrigha, was released in July 2017.
Obs! (magazine): Rostam Mirlashari – the concert producer with a vision for the world!
In addition to his career as an artiste, Rostam is also an in-demand concert producer. His first production was the touring festival “Culture in Exile” in 2000.
In 2001 he founded Kista World Music Festival in collaboration with the Royal College of Music in Stockholm and Kista District Council. Today, the festival continues to present colourful world and folk music artists from all over the world, and the aim is to inspire and increase the feeling of belonging in the suburb of Kista.
Rostam has had a broad collaboration with Riksteatern in Sweden since 2009, producing Sweden’s largest outhouse festival “Eldfesten” and later the festival “FeminEast”
With his passion and love for Balochi music and through hard continuous work, Rostam has created a method for preserving and teaching of Balochi music using modern tools.
Discography
1998 – Omit (Soloprojekt)
2000 – Padik (Soloprojekt)
2000 – Golbang (Golbang)
2003 – Saali Nó (Golbang)
2007 – Sheida (Sheida, singel, Melodifestivalen 2007)
2008 – Nouruz (Golbang, EP)
2009 – Setareh (Golbang)
2009 – Hela Världen (Anders Nyberg ensemble, en samlingsskiva där Rostam medverkar)
2012 – Morid (Golbang, EP)
2013 – Padik (Padik)
2013 – Laila o Laila (Coke Studio, singel)
2016 – Morid (Golbang)
2017 – Pour Afrigha (Saeid Shanbehzadeh & Rostam Mirlashari)