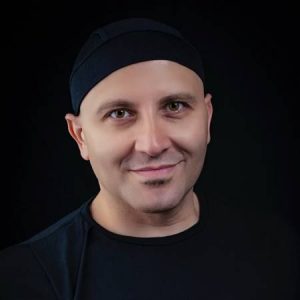 Pouya was born in November 1974 in Tehran. At the age of five, with the support and persuasion of his parents, he started taking piano lessons. During high school, he pursued the piano and was also able to take part in a number of concerts playing classical pieces as well as his own early compositions. At the age of eighteen, Pouya took advanced courses in music composition while extending his piano skills. At the early stages of his professional career, Pouya was commissioned to write music pieces for commercial enterprises as well as charitable organizations helping him gain valuable experiences in this field. During this period he composed themes for news networks as well as providing transitional pieces for Jaame -Jam Television Network for two years. Pouya also continued his career as a professional musician having various repertoires, including Folk jazz, while at the same time composing instrumental music. Up to now, Pouya has taken part in over 300 concerts in Iran and internationally. Being obsessed with sound, Pouya has pursued acquiring skills in sound engineering, mix & mastering of music up to a point where he now carries out those tasks for his own compositions, in addition to working with various artists, and writing score for the soundtrack of local TV series.
Pouya is also a co-founder of “the Persis”, a progressive rock band, alongside Mehran Aminian.