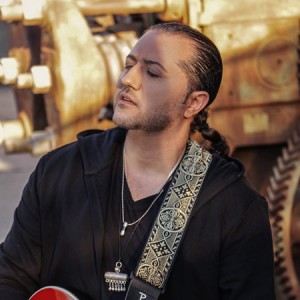 At the forefront of experimental music, Hamed Nikpay’s passion for his innovative genre is embedded in his solid knowledge of fundamentals of Persian music, his ability to perform numerous Persian instruments masterfully, and his incisive interpretation and selection of Persian poetry for his songs. These artistic proclivities have enabled him to create musical paragons, which are gripping and much admired by enthusiasts of Persian and world music alike.
He learned to sing at a very young age, studying under the tutorship of some of the Masters of classical Persian music. His love of Persian Music motivated him to learn and play many musical instruments revered in the Persian culture — Tar & Setar, Tanbour, Oud, and Daf, which he plays expertly and soulfully. He has recorded two albums in Iran, performing as a fusion vocalist, and has produced two albums” Solo Passage”, and “All Is Calm” in US.
Hamed has performed in numerous concerts before enthusiastic audiences throughout Iran, Asia, Europe and U.S. His mesmerizing voice has earned him the reputation of being ‘One of Iran’s Best Young Vocalists’ among both American and Iranian audiences. He was one of the first and few artists who showed his solidarity with the Iranian men and women who have put their lives in the harms way for freedom and democracy. The song entitled “The Owner of this Land—Maaleke een Khaak” written and performed by him for this occasion, has received much popularity for its originality and its soulful rendition.