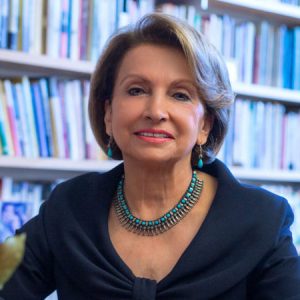 Farzaneh Milani is  Raymond J. Nelson Professor and Chair of the Department of Middle Eastern and South Asian Languages and Cultures

Farzaneh Milani completed her graduate studies in Comparative Literature at the University of California in Los Angeles in 1979. Her dissertation, “Forugh Farrokhzad: A Feminist Perspective” is a critical study of the poetry of a pioneering Iranian poet. A past president of the Association of Middle Eastern Women Studies in America, Milani was the recipient of the All University Teaching Award in 1998 and nominated for Virginia Faculty of the Year in 1999.

Milani has published over 100 articles, epilogues, forewords, and afterwords in Persian and in English. She has served as the guest editor for two special issues of Nimeye-Digar, Persian Language Feminist Journal (on Simin Daneshvar and Simin Behbahani), IranNameh (on Simin Behbahani), and Iranian Studies: Journal of the International Society for Iranian Studies (on Simin Behbahani). She has written for the New York Times, the Washington Post, Christian Science Monitor, Ms. Magazine, Readers Digest, USA Today, and N.P.R.’s All Things Considered. She has presented more than 250 lectures nationally and internationally. A former director of Studies in Women and Gender, Milani was also a Carnegie Fellow (2006-2007).

Abstract:
Does modernity have a gender? What about theoretical discourses on Iranian modernity? Would our definition of modernity, our identification of its markers, makers, and shapers differ if we were to include in our analysis women’s experiences and the literary texts produced by women? Focusing on the life and work of Forough Farrokhzad—a self-consciously modern poet—avoiding gender reversals and binary oppositions, this presentation examines Farrokhzad’s significant contribution to Iranian modernity—her refusal to respect ancestral silences, her recasting of the private story of a female individual as public history, claiming ownership of her body and responsibility for her liberated sexuality, and a relentless search for truth, voice, visibility, and mobility.