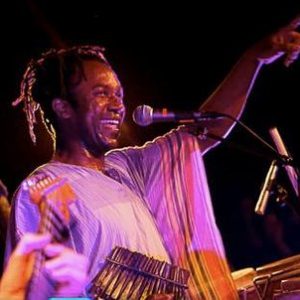 Celso was born in 1966 in Maputo, Mozambique. He grew up in an old fashioned traditional environment and started interpreting traditional music & dance from his native land at a young age. He was also inspired by music from neighbouring countries of Zimbabwe and South Africa.

He completed a teachers training program in percussion at the Royal College of Music in Stockholm, where he is attending a Masters program at the department of folk music.

Celso has been a leader in folk music and dance workshops as well as a stoty teller at schools, kindergartens, libraries and cultural centres in many countries including Sweden, England, Mozambique, Zimbabwe, Portugal, Australia and USA.

Performing on folk music instruments such as “mbira”, “timbila”, drums and many others, as well as through storytelling, Celso takes the audience to a trip to Africa’s hot savanna without leaving the room.

After a Portuguese language teachers training program in Maputo, he worked as a teacher at Guaxene primary school in Catembe (Maputo bay)

Later on he became a music teacher at National Music school, where he taught percussion based on Mozambican tradition which won him a scholarship from Norad organization in Norway, to study at the Zimbabwe College of Music in Harare in the mid 90’s. There he completed a percussion teachers training course and a basic training research at the Ethnomusicology program together with other artist from different countries and cultures. He began to learn playing the drum by helping his uncle to make drums using tubes and gallons. Since the age of 9, Celso has been a member of traditional music and dance groups in different schools and cultural centres.

At the age of 14, he was a professional musician, earning enough to pay his school fees.

Since the age of 21 Celso toured Europe, USA, Australia and Africa. He also appeared as a solo artist in different performances including Skeppsoholmen Jazz and Blues Festival as well as Fasching Jazzclub and in several story-telling programs in various countries including the UK.

Celso played with Golbang from 2006 to 2011 contributing to many memorable concerts, tours and TV and radio shows in Scandinavia and the rest of the world. He was there when Golbang recorded their well-received album “Setareh” in Stockholm in 2009. Since then, his focus has been on the Royal College of Music in Stockholm. Celso returned to Golbang in 2018 with the same passion for the band and the music.