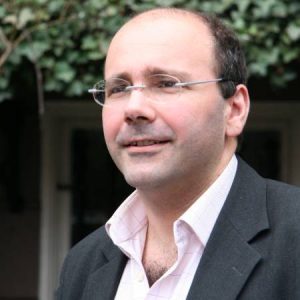 Ali M Ansari   BA (Lon) PhD (Lon), FRSE, FBIPS, FRAS, is a professor of Iranian History & Founding Director of the Institute for Iranian Studies at the University of St. Andrews; Senior Associate Fellow, Royal United Services Institute. In 2016 he was elected a Fellow of the Royal Society of Edinburgh.
He is the author of “Modern Iran since 1797”, 3rd updated Edition, Taylor and Francis, London, 2019, “Iran, Islam & Democracy – The Politics of Managing Change” 3rd Edition, Gingko, London, 2019; “Iran: A Very Short Introduction” OUP, 2014, “The Politics of Nationalism in Modern Iran” CUP, 2012, “Crisis of Authority: Iran’s 2009 Presidential Election” Chatham House, 2010; “Iran Under Ahmadinejad”, Adelphi Paper, IISS, January 2008, “Confronting Iran: the failure of US policy and the roots of mistrust” Hurst, London, 2006. He is also Editor of the “Cambridge History of Iran” Vol 8 (The Islamic Republic).

This paper will look at the interaction between Iranian intellectuals and thinkers and the ideas of the Enlightenment with a particular focus on the influence of British – whig – ideas, as they related to progress and good governance. Te paper will look at the initial contacts in the early nineteenth century and the adaption and absorption of these ideas through the later part of the century and towards the Constitutional Revolution. The paper will argue that British political ideas and ideals played a far more influential role in shaping modernity than previously appreciated and that while Iranian intellectuals found much that was attractive in them, they were regularly disappointed by British policy and its failure to live up to those ideals. The paper will conclude by noting that Iranian thinkers remained wedded to the whig narrative long after it fell out of favour with British intellectuals