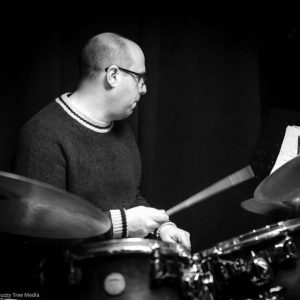 Steve Farrugia is a Toronto born and raised professional drummer who has shared the stage with the top musicians in Toronto and outside the country as well. Some notable musicians Steve has had the pleasure to play with are Reg Schwager, Robi Botos, Adrean Farrugia, Ted Quinlan, Artie Roth, Bruce Cassidy, Bob Brough, Sophia Pearlman, George Koe ller and many others. Steve has performed at many great venues and festivals such as TD Jazz festival, Beaches Jazz festival, Shores of Erie music festival, Oakville Jazz festival and many more. Also performances at venues like The Rex, Gate 403, Club 744, Palais Royale and Casinos in Canada and the USA. Steve studied at Humber College Jazz studies program with great educators like Steve Tattersol, Don Vickery, Mark Kelso and Paul Delong. His studies have allowed him to play in many styles such as Jazz, Big Band Latin Orchestras, Rock and Top 40 bands.As well as many Theatre productions throughout the city. Steve also is currently teaching Drums and Percussion at Arcadia school of music.