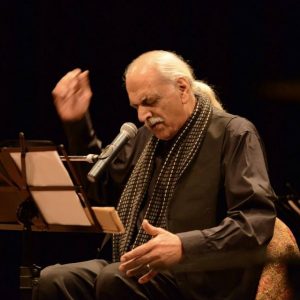 Soleyman Vaseghi (Soley) was born in Tehran in 1946. His love of music and extraordinary voice were remarkable even from his early years. At the age of 20 his performing career began, practicing a wide variety of vocal styles.While he was a student of Sociology at the University of Tehran, he was introduced as “Soley” on National Iranian Radio and Television. In a short time Soley became very famous. He began to compose music for himself as well as for other singers. Along with other musicians, from 1979 Soley began extensive research in literature, poetry and different kinds of music. He produced several “New Age” style albums for international audiences, inspired by the poetry of Rumi, Hafez, Roudaki and Sohrab Sepehri. His albums, “Vaghehe”, “The Water” and “The Rainbow” are the results of this journey. His most recent work, named Face of the friend (2014) describes the journey of a seeker towards the Beloved. Soley sings this album in Qawali style, this album is available through iTune and CDbaby: http://www.cdbaby.com/cd/soley3. Soley currently lives in Toronto, Canada. Some of his recent performances is Inner Journey I with Rumi Canada @ the Aga Khan Museum, Tirgan & Small World Music festivals. For further info visit his site: http://www.soleymusic.ca/