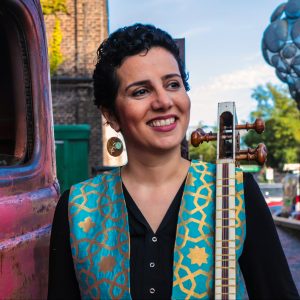 Padideh Ahrarnejad is an award-winning tar player, arranger, composer, and educator who has brought Persian music across Europe, the Middle East, North America and Asia. A graduate of the Tehran Art Music School and the Art University of Tehran, she studied tar with major figures of Persian music.
She was a member of the Iran National Music Orchestra and the Radio and Television Orchestra; performed with the Simorq Orchestra, an all-star group dedicated to acquainting the public with Iranian culture; and was a featured soloist on legendary Iranian composer Hossein Alizâdeh’s album, Honarmandan-e Javan.
Emigrating to Toronto in 2016, she is a member of Kuné, “Canada’s Global Orchestra,” a group of elite players from different musical traditions organized by the Royal Conservatory of Music, whose debut
album, recorded at the Banff Centre, was released by Universal Music Canada. As a soloist and bandleader, she has performed at the Tirgan festival, the Aga Khan Museum, Toronto City Hall, Ryerson University, the University of Toronto, and elsewhere, and was a participant in the first Toronto Arts Council Newcomer Mentorship program. She made her own group “Partow”in 2019 and published the first CD under the same name. In addition to her packed performance schedule, which sees collaborations with a range of musicians from across the musical landscape, she teaches tarand setar.
————————————————————

Journey to the East