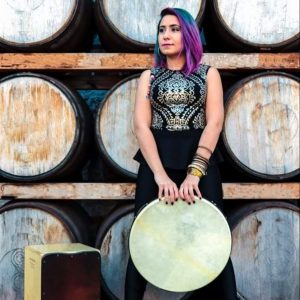 Nour Kaadan , percussionist and video creator started her musical career in 2010 in Damascus, Syria playing classical middle eastern and Flamenco rhythms on cajon, with performances in Lebanon since 2014 and later in Toronto since 2017 .
In 2015 she started using her musical skills to help children suffering from trauma express themselves through music, rhymes and songs. She facilitated workshops in Syrian refugee camp In Lebanon, using music as a therapeutic activity to help children in or
from war zones to deal with trauma. She arrived in Toronto in 2017 and started playing cajon with Arabic and Spanish music. She is a founding member of Diar (ديار) band and a founder of Music From Hope, a collective initiative that aims to use music as therapeutic
activities to help healing,form conviction, and allow free creativeness to new comer children and youth in Toronto.

Journey to the East