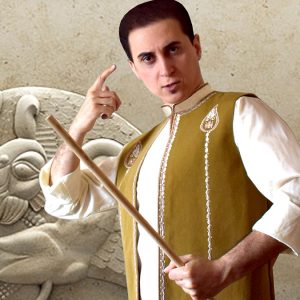 Arash Farhadi (Ali Farhadipour) has an MA from Carleton University of Ottawa as well as an MA from Tarbiat Modares University of Tehran. Farhadi is a Shahnameh-reciter (naqqal), and an expert at communication, culture, theatre, cinema, and Iranian & Shahnameh Studies.
Arash learned acting and Naqqali (dramatic story-performing) under the mentorship of his mother Morshed Saghi Aghili and has worked as Naqqali’s tumar-writer, playwright, director, actor and Naqqal (story-performer) in more than 100 productions in Iran, Turkey, Italy, Canada and USA.
Farhadi’s notable accomplishments include creating and teaching a workshop- titled “Present Like Hollywood” to increase audience engagement in presentations; writing and directing a Naqqali titled “300” in Iran and Italy as a response to the fictitious Hollywood film 300 (Zack Snyder) that some consider an insult to the Iranian and world history; management of Naqqali Centre in Toronto&Ottawa; authoring “Techniques to Increase Engagement with the Audience in Theatre and Cinema”.

The Story of Jamshid, An Epic From Shahnameh

The Story of Jamshid, An Epic from Shahnameh