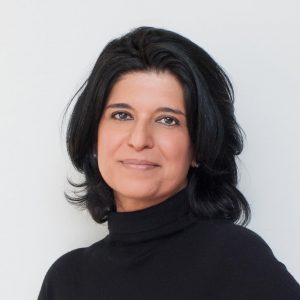 Based in New York & Vancouver, Shabnam is the co-founder of Big Bad Boo Studios and Oznoz, an OTT platform for kids. Shabnam has produced Mixed Nutz, 1001 Nights, Lili & Lola and is currently producing The Bravest Knight with Hulu, and 16 Hudson with TVO Kids. Oznoz is an ad-free subscription based platform with shows like Babar and Super Why offered in 10+ languages. Big Bad Boo’s shows air in over 120 countries on PBS Kids, CBC, Disney, Teletoon, Cartoon Network, ORF, Discovery Kids, Gloob Brazil, RTBF, MTV3 and others. The company produces and distributes educational kids content such as TV shows, digital games, comic books and curriculum
materials. With a BS in Computer Science, a BA in German Literature from the University of Pennsylvania, and an MBA from New York University, Shabnam has spent over 10 years on Wall Street and held managerial positions at EXIS, Misys and Deloitte & Touche.
As an entrepreneur and producer, she has appeared on CNN, FOX, CBC, BBC and
NPR. She speaks English, German, Persian, French, and Spanish.