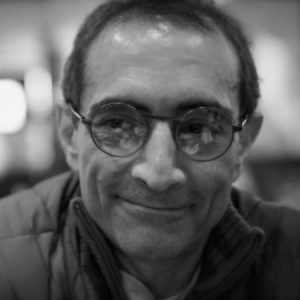 Sasan Ghahreman is an Iranian-Canadian novelist, journalist, actor and director, and social-documentary photographer.  Born in 1961 in Iran, he studied Performing Arts at the University of Tehran and performed in 25 plays and directed 5 inaddition to writing a collection of short stories and a number of plays and screenplays before moving to Canada in 1984. Years later, he continued his academic education in English Literature and Sociology at the York University in Toronto.

During the past 3 decades, Ghahreman has published 4 novels, a number of short stories, 3 plays, a collection of critical articles, and 3 selection of poems. His first and 2nd novels, Gossal (1995-2016) and Cafe Renaissance (1997-2016) have been praised by numerous Iranian critics around the world and reprinted several times due to public demand. He has also directed and performed in numerous plays, and three feature films by the Iranian filmmakers residing in Canada.