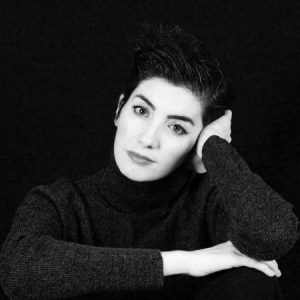 Maryam Hafizirad is an Iranian painter, from Isfahan, Iran who is Deaf. A permanent resident of Canada, she graduated from Isfahan University of Fine Arts in 2002. Her first exhibition was in Iran at the age of 18. Since then her award-winning works have been shown individually and as part of the artistic group “Farda”, meaning “Tomorrow”, in major cities of Iran, China, Germany, Malaysia and India.
Following her heart’s desire and performing from a place of strength as a Deaf artist, She is a full-time visual artist today. Her passion for painting is the greatest engine driving her to succeed in a hearing world. Every artist has their own way of conveying their art and Maryam shares her exceptional vision of a silent universe through the metaphor of an underwater scene. Following the Persian classical painting in her early works, she originally used human characters in her paintings. At that time her work was dark in subject and colour. When she moved to Malaysia and then settled in Canada, her work transformed. In the second generation of her work, she realized this line was not projecting the essence of her evolving ideas and growth. She began using brighter colours, symbols of God, love, life, water and fish, which became her true secret code in art.