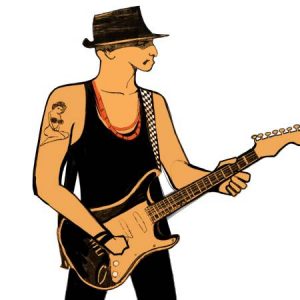 Luis Delgado is a Costa Rican born musician and multi-instrumentalist. As a child, he began his music career being influenced by piano recitals and theatre plays in elementary school in New York. He attended church choir recitals and eventually joined a children’s choir. After taking formal guitar lessons with a New York jazz guitarist, he decided to seriously pursue guitar and bass playing full-time and joined a host of local rock/funk/punk/R&B bands in Brooklyn for 15+ years of live performances.
In 2017 he joined forces with guitarist Anoush Saboktakin at gatherings of the community of local Iranian artists and musicians and decided to create a musical project based on music from the 60s/70s era with a strong message of unity and cultural appreciation. They called it “Muslim and A Mexican” referring to their cultural backgrounds from Iran and Latin America.