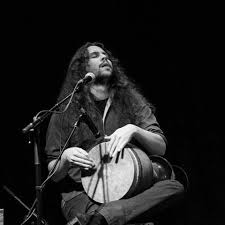 Idriss Agnel is a nomadic multi-instrumentalist  and vocalist with a multi-cultural background. He has studied and performed in French medieval, Judeo-Spanish, Arab-Andalusian, Flamenco, Celtic and jazz-rock compositions.

Idriss started  playing the violin with Michaël Nick at age 4. At age 5, he expressed the desire to study zarb, classical guitar, cistre and music composition, under the directions of his father . He learned the oudou, the Flamenco cajon and the electric guitar. At the age of 7, he entered the school of Notre Dame de Paris and studied  for 2 years, under the direction of Nicole Corti. He studied Gregorian, Baroque and Contemporary songs. He then learned Indian tablas with Nabankur Batacharia. He has been performing professionally in concerts, from the age of 10, as a percussionist and singer. He performs in a duet with his father “Duo Agnel” with a  repertoire of medieval, Arab and Afghan music and accompanies his mother, Amina Alaoui, in her creations with his Arabo-Andalusian repertoire.