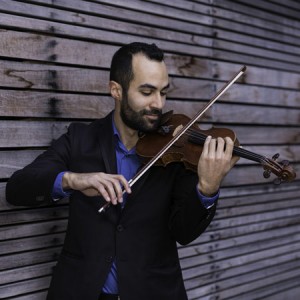 Born in Tehran, Bijan Sepanji is a multi-faceted performer and educator based in Toronto, Canada. As a member of the Ton Beau String Quartet, Bijan regularly performs new compositions by up-and-coming composers as well as standards from the classical repertoire. In the past two seasons, Bijan performed concerts and gave masterclasses with TBSQ in Calgary AB, Nashville TN, Chicago IL, as well as at the Faculty of Music at the University of Toronto. In addition to his string quartet activities, Bijan also performed a violin recital and offered workshops in his hometown, at the University of Tehran as part of a composition competition for the students of the university in collaboration with his duet partner, Saman Shahi. Having trained at Indiana and McGill universities, Bijan’s orchestral experiences include performances with Indianapolis and Kitchener-Waterloo symphonies, as well as with London Symphonia, Hamilton Philharmonic and the Toronto Concert Orchestra. This past spring, Bijan had the opportunity to travel to Beijing and perform with a 35-piece orchestra at the prestigious Beijing Concert Hall. He will return to China later this year and perform as part of a multi-city tour with Sinfonia Toronto. Bijan is also involved with the Mooredale Youth Orchestra, conducting and working with the junior strings division and preparing them for three diversely programmed concerts a year.