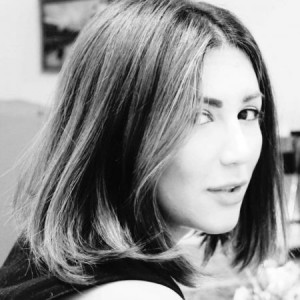 Bahar Almasi is a Toronto-based poet/cultural activist. Born in 1985 in Tehran, she is convinced that nursery rhymes and childhood poems are what intrigued her to pursue a career in poetry from an early age. Since her first published poem at fourteen, she has continuously published her poems, along with short stories, short plays, translations, and articles within and outside of Iran. Her passion for cultural activism has also lead her to make radio documentaries and podcasts, and participate in theatrical projects. She has also collaborated in establishing Kaanoon Toronto (a Persian poetry society in Toronto) and multiple book-reading campaigns.
Her first book of poetry ‘Lady Gemini’ was published by Afra Publications in Canada in 2015. Her second book ‘Letters of Lead’ was a collaboration with Reza Rouzbehani, which was published by Dastan Publications in Iran in 2017. Her two new books have attained publication rights in Iran and will be released this summer by Sib-e Sorkh Publications. ‘Bind-less Epic’ is a post-modern narrative about the dichotomy of staying in one’s homeland or leaving. ‘One Head and a Thousand Sounds’ is a collection of poems about transitioning from womanhood to motherhood. Bahar Almasi also has created three self- illustrated children’s books, which will be published simultaneously in Iran and in Canada by the end of this year.