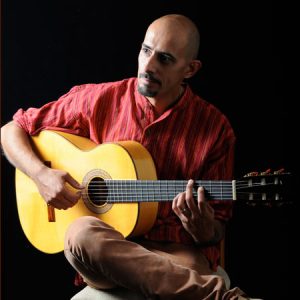 Aïda and Babak were both born and raised in Tehran. Each came from a different musical background but they both were looking for a new musical direction. It was their common love of flamenco that brought them together, some 13 years ago. Soon, their attraction to jazz manouche led them to discover an unknown aspect of the music. From that point, they went on to create a music that encompasses all the music they love, from American and European jazz to Iranian and European classical, to Spanish and Brazilian rhythms, to Turkish and Bandari melodies, with even a touch of Celtic and Balkan—achieving a modern musical alchemy where nothing is juxtaposed or forced.
The music of Manushan flows and simmers and blends in just the right doses, with all its components reaching a deep and natural synthesis.