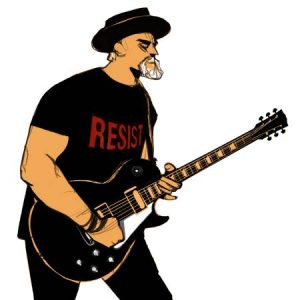 Anoush Saboktakin was born and raised in Tehran where he started playing the guitar at the age of 15. During his late teens and early twenties, he became one of the first guitar players in Iran to reach a high degree of proficiency performing and teaching complex musical vocabulary and techniques of modern electric guitar. He later moved to Los Angeles where he performed with numerous projects and continued his music education earning a Bachelor’s degree in Music Composition. In 2015 he moved to New York City where he later met Costa Rican musician Luis Delgado through gatherings of the community of local Iranian artists, and that was when the duo started.
Being fed up with hateful, racist and ignorant stereotypes towards immigrants and minorities by the current U.S. administration they decided to name their project “Muslim and A Mexican” – referring to a duo of an Iranian and a Costa Rican. “The aim behind the name is to provoke thoughts and make people face those tough questions as to where they see themselves fitting on this spectrum,” Anoush said.
Later, in 2018 with the addition of Pooya Ghorbani on lead vocals, the band expanded the repertoire from the 60s and 70s Persian pop/rock to classic rock and blues classics. The Iranian community of the tri-state area warmly embraced the band and after a series of sold-out shows in New York the band is excited to bring their international debut to Toronto as part of Tirgan Festival 2019.