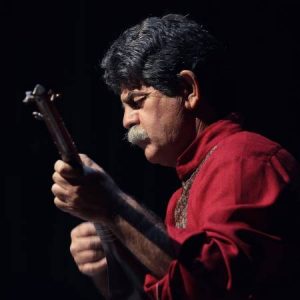 Ali Akbar Moradî is a well known Kurdish musician and composer. He was born in Gahwareh, Kermanshah Province, Iran. He started music at a very early age, and learned the Kurdish maqam repertoire and tanbur (Kurdish lute) under the supervision of Kurdish masters such as Mirza Sayyed Ali Kafashyan, Kaki Allah Morad Hamidi and Sayyed Vali Hosseyni. He gave his first recital in 1971 in Kermanshah. In 1981, he began collaborating with the Kurdish singer Shahram Nazeri, and performed throughout Europe and North America. He is an expert on the tanbur instrument, which is considered sacred in Kurdish sufi music. He has performed music in New York, San Francisco and London. On September 30, 2006, he gives a special program as part of Voices of Kurdistan in San Francisco World Music Festival, he has been appointed as one of fifty of the best musicians around the globe by a British music magazine.