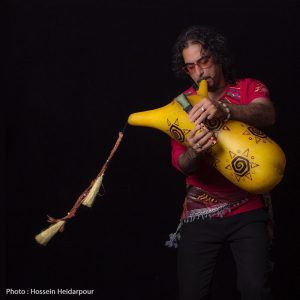 Mohsen Sharifian was born in Boushehr in 1976. He holds a bachelor’s degree in Social Sciences –Researching (BA) and a Premier Grade Art Degree (equal to a PhD) in Bagpipe.
His started his artistic activity from theater in 1983 and later launched his musical activity by founding the Boushehr Lian Music Group in 1993, which has become the most popular and prestigious folkloric southern music band in Iran. He has spent the last two decades immersing himself in the musical traditions of the Bushehr region, writing several books, collecting songs and dance-tunes and using them as inspiration for composing new works. He is a virtuoso Nay-Anban (bagpipe) and the Nay-Jofti (double-pipe reed flute) performer, which are the oldest and most emblematic instruments of the Persian Gulf region.