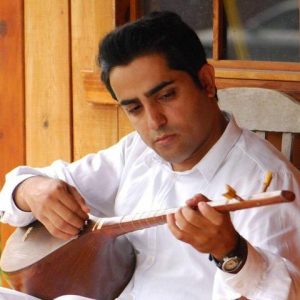 Iman Sadeghzadeh was born in 1981 in Mashhad, Iran. At an early age he was inspired by the sound of his father’s uncle dotar. Soon after, he started playing dotar In 1998, he learned North Khorāsān Moqāms from Rahim Rezaei in Bojnord and Mohammad Yeganeh in Quchan. At the same time, he started learning Persian classic music (Radif) and tār and setār under instructions of Farid Irani in Mashhad. After Mohammad Yeganeh moved from Quchan (to Mashhad), Iman became an active member of Yeganeh Ensemble in Mashhad. In 2003 he moved to Kiev, Ukraine and started collaborating with “Jām” ensemble founded by Iranian musicians of Kiev Tchaikovsky Conservatory as Dotār and Tārbass player.