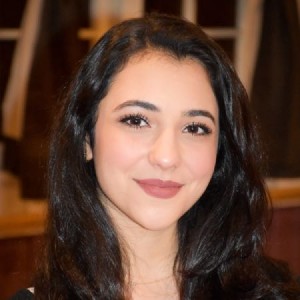 Yasmin (Yasi) Bozorgi started dancing with Vancouver Pars National Ballet (VPNB) about 7 years ago. She started off just learning the basic steps in the youth classes until she was ultimately able to join the performing group about 6 years ago. She began dancing at age 10 at North Shore Academy of Dance; starting with hip hop and slowly progressing to more contemporary dance styles. She danced with NSAD and a program through her school until her graduating year. She has been performing in various competitions, plays, and shows since her very first year of dancing at age 10. She loves all folk dances, but if she had to pick one it would be Azari. She loves the delicacy and gracefulness that comes with the dance. Bozorgi chooses to do Iranian folk dance as a way to stay better connected to her heritage and culture. As a girl who was raised in Vancouver, she had no idea what her background was. Since she loves dancing, it is the perfect way to get in touch with her culture.