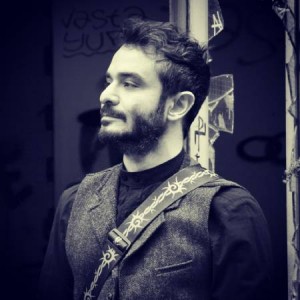 Born and raised in Tehran, Iran, Ali Azimi’s interest in music started at a young age. Coming from a family with a musical background, he became a self-taught pianist and started studying classical guitar under the supervision of Bagher Moazen. Azimi got his bachelor’s degree in Mechanical Engineering at the University of Tehran and continued his education in the United Kingdom to obtain his Master’s degree in the same field. In his early 30s, Azimi stopped his career in the field of engineering and started perusing a career in music. To peruse his passion, Azimi went back to Iran in 2009 and formed the Iranian rock band Radio Tehran, where he became the vocalist and songwriter. The band became popular after their debut album “88” released in 2009/2010. Departing from that band, his first solo album “Mr. Mean”, was released in October 2013. He has done multiple successful tours of Europe and North America. The music video for the song “Mr. Mean” was the winner of Farhang Foundation’s Short Film Festival. Azimi is currently the leader of the Persian rock and alternative rock band, “Ali Azimi and the Needs”.