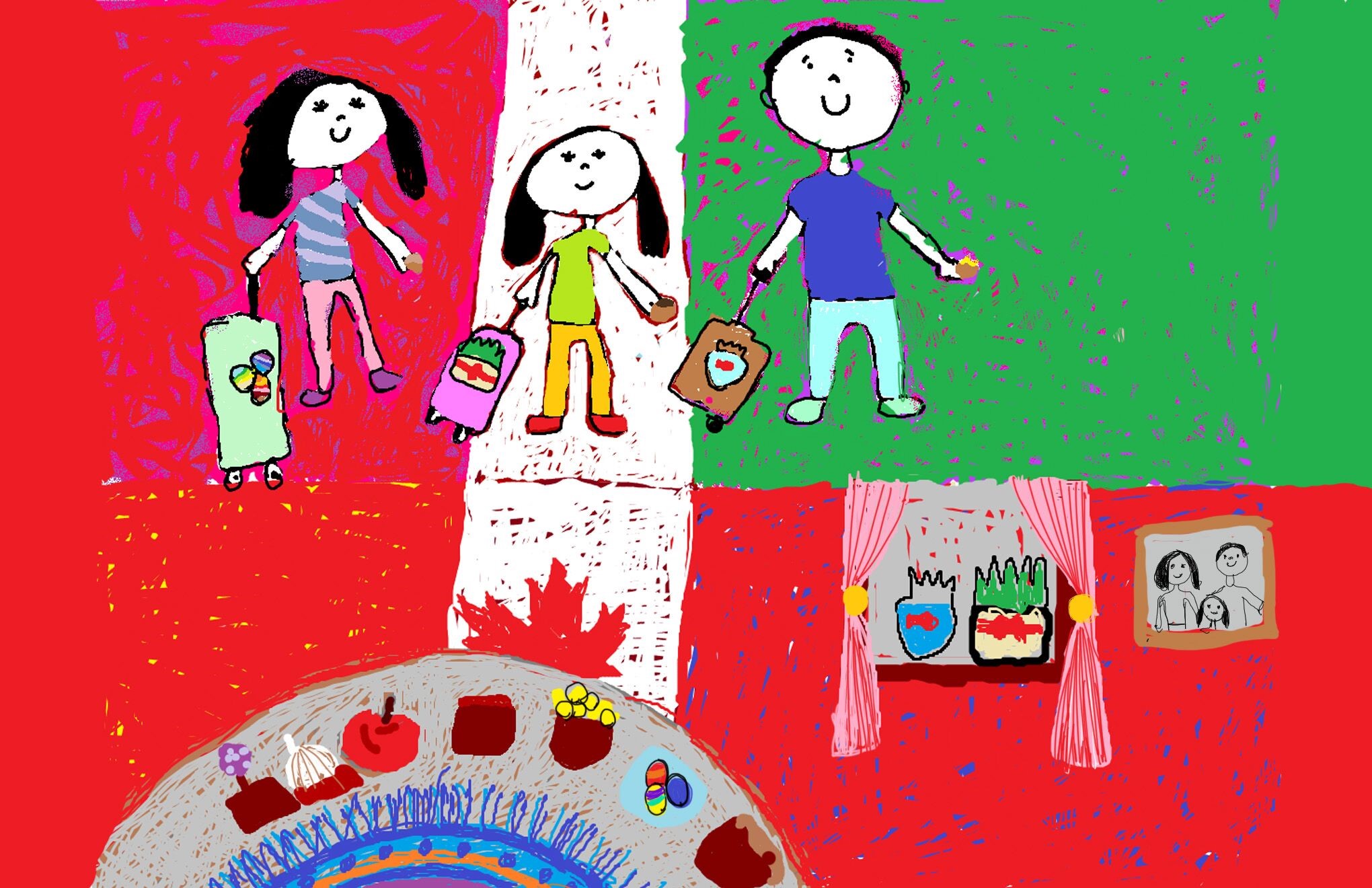 Perhaps one of the most notable components of the New Year’s Day festival is a spread of colorful items named the Saft Seen. The seven (haft) core items whose names start with the sound “s” (seen in Farsi), plus other symbolic objects, are displayed on a decorative fabric (sofreh), either on the floor or on a table. The precise origin of the Haft Seen is unclear. There are colloquial discussions about other historical iterations of the spread, such as Haft Sheen (the Farsi letter sheen); Haft Mim (the Farsi letter mim); and or Haft Sini (seven trays).

Many cultures celebrate Nowruz around the world, but not all of them practice this particular ritual. Those who do, create a personalized, modern rendition of Haft Seen by using a selection of seven or more symbolic items from the following list:

These additional items are often found on many Iranians’ Haft Seen: 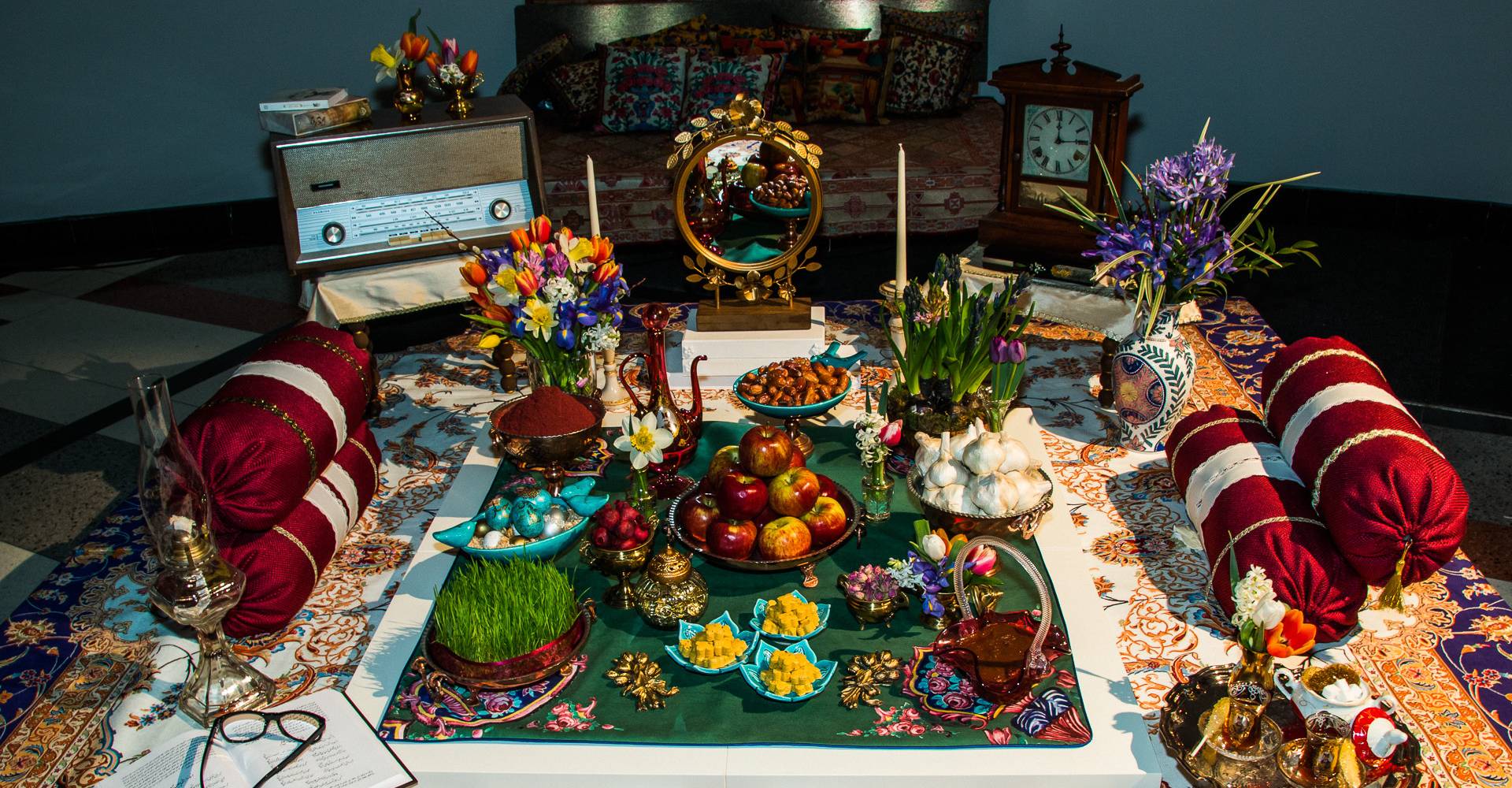 For the New Year’s Day festivities, Afghan families prepare a sweet and crunchy medley called Haft Mewa (seven fruits). The preparation of this dish involves a careful ritual of washing, rinsing, and soaking of the ingredients. Dried fruit and nuts including raisin, jujube

, pistachio, hazelnut, apricots, apples, and prunes are some of the components that are used to make this Afghan delicacy.

Finally, an assortment of fresh fruits, sweets, and pastries are placed on the sofreh to serve to guests who visit over the Nowruz holidays. An elegant Haft Seen setting is highly prized and creates a festive backdrop for family photographs.

With the current looming environmental catastrophe, climate change, and global warming, it is imperative to question customs and traditions and seek sustainable alternatives. The ecological conservation movement is intensifying in Iran and around the globe, and numerous NGOs are working hard to restore nature. Inevitably, various elements of the Haft Seen have been targeted and scrutinized, with regards to sustainability and ethics.

The sabzeh, is a home-grown bed of greenery of sprouted legumes such as lentils, wheat or barley. It is then composted, or put back into the woods, on the 13th day of Nowruz celebrations (sizdeh bedar), to turn into organic fertilizer.

It has been suggested by environmentalists in recent years that growing sabzeh, be replaced by planting seeds of local fruit trees. Once the seeds grow into saplings, this group recommends, they should be transplanted into a designated protected area. These efforts are the result of environmentally conscious young Iranians who feel the need to improve their rapidly urbanized landscapes and move together in cooperation to rectify deforestation in various parts of the country.

The “no live goldfish” movement

In 2016, the Iranian president posted a celebratory photograph with no fish present on the table. In place of a goldfish, a Seville orange (narenj) was put in an ornamental bowl. This move, which came in response to concerns raised by animal rights activists for the welfare of the 5 million goldfish sold annually in Iran, was welcomed by fans and critics alike. The call to abandon this tradition has been gaining momentum as the harmful practices of industrial farming, and the environmental realities of this practice have become more widely recognized.

Every year millions of goldfish have their lives cut short when placed in a tiny decorative fishbowl. Often crammed in there with other fish, and no access to any source of food, their situation does not allow for optimal physical nourishment and growth. Without proper care and sufficient living space, these fish live only to a fraction of their natural lifespan which can be as long as 25 years.

If the fish survives beyond the 13 days of Nowruz celebrations, oftentimes it is released into a river, pond, or a lake, with disastrous consequences. Researchers from Murdoch University, Australia, have investigated the invasive effects of releasing pet goldfish into the wild, as they travel great distances and compete with local fish for resources. According to this research, the goldfish which originates in East Asia is considered highly invasive in other environments and “can potentially impact water quality, introduce disease, disturb habitat and compete with native species putting them under serious pressure”. Therefore, it is not advisable to release goldfish, or any other pet for that matter, into a non-native setting.

But we don’t have to leave our beautiful Haft Seen without this symbol of life. A Seville orange (narenj), leaf of a pomegranate, and a branch of boxwood tree (shemshad), have traditionally been used in some households in place of a living animal. For those with a creative side, tutorials for creating origami fish using colorful paper, are widely available and can be a perfect family activity with the children. Moreover, it can be a great learning opportunity for children about the importance of treating animals with respect and dignity.