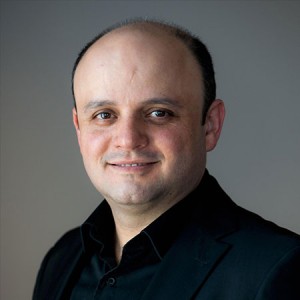 Iranian-Canadian conductor, composer and pianist Maziar Heidari led a flourishing musical career in Iran for over a decade before moving to Toronto in 2009. Heidari obtained a M.Mus. in Conducting from the University of Toronto and has since held several conducting positions including with Orchestra Toronto, Hart House Orchestra, and the University of Toronto Symphony Orchestra. After being recognized for his conduct at the Tirgan Festival, Heidari was inspired to co-found the Iranian-Canadian Composers of Toronto (ICOT), a non-profit collective dedicated to works celebrating diversity and composed by and for Iranians living in Toronto. In 2017 alone, his work as Music Director of ICOT earned him an RBC Top 25 Canadian Immigrant Award and a position as a juror for the Juno Awards. An active freelance educator for students of all levels, he founded Heidari Music School, works as a member of the college of examiners for the Royal Conservatory of Music and is a member of several music teacher associations. Heidari is an associate composer with the Canadian Music Centre and a professional member of Society of Composers Authors and Music Publishers of Canada (SOCAN).