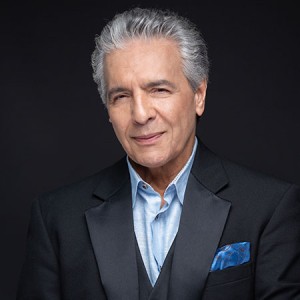 Faramarz Aslani is a legendary Iranian-American Artist. His satin voice, novel style and charm have made him a singer of the ages. He is a singer, songwriter, guitarist, producer and an active philanthropist. He released his first album, “Delmashghooliha” (Occupations of the Heart), with CBS Records in Iran in 1977.

What makes Aslani unique, is the fact that apart from a handful of poems by contemporary poets and a few classical bards, like in “Hafez, A Memorandum”; all other lyrics are his own, vocalized with heartfelt passion, inter-woven with his own music. Aslani has spent much of his career, time and energy on philanthropic missions he believes in, and has been an active force for many non-profits worldwide. Aslani and Babak Amini had a magical performance together at the 50th anniversary show for legendary singer “Ebi”.

Under the Musical Direction of Babak Amini